Tarangire National Park is perhaps the least-visited park among the game parks in northern Tanzanian, and for that reason remain a treasure yet to be unveiled.

The park is located not far from the south eastern direction of the impressive Lake Manyara and stretches over an expanse of about 2,600 sq km. It was actually named after the stunning River Tarangire that flows through this beautiful park. 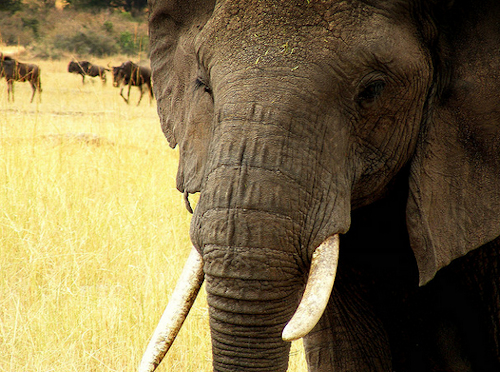 Majority of the park is covered with grassland plus with swamps as well as flood plains, that feed River Tarangire. The northern part is dotted with huge baobab trees, across its terrain and these dominate the scenery. Several of these trees are more than one hundred years old. The other part of the park is comprised of acacia trees, open bushes as well as palm trees.

Through the dry season this is when the largest number of wild animals are seen and this season begins in June up to the finish of November. There are several wild animal species some adapted to the plains as well as others are adapted to the savannah.  In 1980 A wildlife census which was conducted in the wet season showed that the number of wild animals in the Tarangire ecosystem was as follows: there were about 6,000 buffalos, 32,000 zebras, 25,000 wildebeests, 3,000 elephants and 30,000 impalas.

in the dry months, Zebras, fringe-eared oryx, wildebeests, cape buffalos, Thomson’s gazelles and hartebeests are commonly seen in big  numbers and majority of these leave out of the park and head in the direction of  Lake Manyara and continue further north in November when the area is experiencing  short rains. The great herd of animals later returns during the long rains which are experienced in April as well as May. The other animals that normally remain within the park are: lesser kudus, giraffes, impalas, warthogs, waterbucks, dik dik and elephants however also hippos can commonly seen by the river banks and swamps in the middle of the park. Among the commonly seen primates in this park are Baboon plus vervet monkeys.

The most prominent predators in Tarangire National park include lions, spotted-hyenas, cheetahs, as well as leopards. Among the smaller predators are the  bat – eared foxes and  jackals, although  porcupines, civet cats, bush hyrax and rock hyrax together with mongeese and ground squirrel are also seen time and again.

The profusion of birds in the park is very diverse with more than 350 species recorded in the park’s premises.  A number of Eurasian migrants are commonly seen from the month of October the finish of April, and this is actually the best time to go bird viewing. Ostriches, flycatchers, abdims storks, buzzards, saddle billed storks, eagles, shrikes, open billed storks, vultures, bee-eaters, cuckoos, marabou storks, kites, weavers, yellow billed storks, the ibis, kestrels, green backed heron, rollers, grey-black headed heron, hornbills, harriers, woodpeckers, purple heron and many more are some of the bird species you will find here.  In addition there is a diversity of kingfisher species in the park among which are the striped kingfishers, giant kingfishers, pygmy kingfishers, pied kingfishers, grey headed kingfishers and the malachite kingfishers.