Serengeti National Park is located in the Northern part of Tanzania and stretches over an expanse of approximately 14,760 sq km. the park was initially established back in the 1920’s, although it was declared a National Park in the year 1951. It is prominent internationally as an place with of splendid wildlife viewing. In particular, the park is well-known for the vast herds of wildebeests plus zebras which annually migrate through these plains each year after the rains as they look for fresh pastures.

This word ‘Serengeti’ was derived from a word in the local Masai language for ‘endless plains’. The park is located on a towering plateau between the Highlands of the Norongoro to the east and to the west, is the spectacular Lake Victoria. To the north is the Masai Mara Game Reserve of Kenya which actually forms the northern-section of the Serengeti-ecosystem. 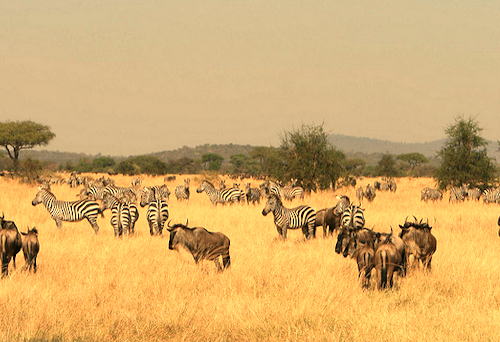 Many people regard the Serengeti as best game park in the whole of Africa. All through the year, an abundance as well as diversity of Animals and birds are frequently seen within the park. The most outstanding feature in this park is the overwhelming number of wild animals in the plains during the yearly migration. In addition, it is prominent for its exceptional safari lodges as well as the stunning granite outcrops (kopjes) which project high above the plains.

Numerous varied types of animal habitat are in this park and these have provided shelter to a wide diversity of species. in general, the park can be partitioned into d regions. The north, is hilly with woodlands, the southeast is characterized by short plus long grass-plains, the western corridor holds far-reaching woodlands as well as black clay-plains, while the centre has acacia woodlands plus savannah. Every vegetation zone draws various animal species.

Between the months of July to September, these animals are in the northern part of the park as well as in the neighboring Masai Mara Game Reserve found in Kenya, and this is their refuge for the dry season. From mid-September the animals move south past the beautiful lobo wildlife lodge to the short grass-plains in the Nabbi Hill as well as the gol mountains around the month of December. Those animals that would have survived the lengthy migration trail calve between January and February within this area, prior to continuing with the search for fresh pastures and water in May. The estimated distance tailed every year is about 800 km. the great herd of wild animals is estimated to comprise of over 1.5 million wildebeest and about 30,000 to 40,000 burchells zebras.

OTHER ANIMALS FOUND IN THE SERENGETI

Other than the wildebeests and zebras, there are various animals found within this park including a diversity of antelopes such as Thomson’s plus grants gazelle, as well as Small herds of waterbucks, cape buffaloes, Masai giraffes and topi. Warthogs are also common seen in addition to Hyenas, jackals and lions. The Lions are normally seen in large prides of cubs following their lioness, or solitary males resting in tree shades. The Lions normally hunt between sunset and dawn. On the other hand, Cheetahs are commonly seen in the open plains especially in the morning or in the late afternoon, when the temperatures are not so high. They depend on daylight as well as speed to get their prey. Furthermore, Leopards which are majorly nocturnal hunters, are not regularly seen although if seen are normally sleeping or resting in tree branches. Pods of hippos are seen in the larger pools as well as rivers, while Crocodiles are now and then seen basking on the banks of the river. Among the primates common seen in this park are Vervet monkeys as well as baboons. Rock hyraxes (or dassies) – a sort of rock rabbit who’s nearest living relative is the elephant! – are always seen around the lodges. Nonetheless, Nocturnal animals such as bat eared foxes plus porcupines are not frequently seen unless in the very early morning or at sunset