The Selous Game Reserve is located 6 to 8 hours drive towards the southern part of Tanzania, south of Dar es Salaam and it covers an area of about 54,600 square kilometers of wilderness. Selous game reserve is located in remote Tanzania and because of this making it easily accessible mostly by small aircrafts. In 1982, the Selous was declared a UNESCO World Heritage. The reserve was formed after four different reserves within the area joined together in 1922 to form today’s Selous which is actually the largest reserve on the African continent. This reserve is home to the highest population of elephants in addition to several other animals, and more than 400 bird species making it Africa’s Wildlife.

It is the best yet one of the least explored and known  reserve in Tanzania with large a large wilderness swarmed with a variety of wildlife. Its vastness and remoteness are among the unique features that give the Selous a unique splendor. 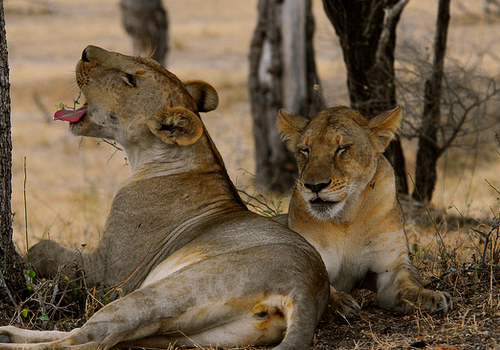 The Selous reserve is home to more than 350 bird species, reptiles, approximately 200 different plant species in addition to a great diversity of wildlife. It’s here that once the highest number of elephants on the African continent (110,000 elephants) was found. Unfortunately due to the cruel works of poachers back in the 70’s and the 80’s who gunned downed these animals mainly for their ivory; the number of elephants has greatly decreased to approximately 45,000 elephants.

Besides this reserve being famous for its elephants, hippos and rhinos, it also has a large diversity of other animals among which are: hunting dogs, brindled gnu, leopards, impalas, Nyasaland gnu, lions, sable antelopes, spotted hyenas, elands, reedbucks, greater kudus, buffaloes, giraffes, waterbucks, hartebeests, zebras as well as warthogs.

Because game viewing is the primary tourist activity within the Selous, this can be done in several different ways such as game drives, walking safaris and boat trips. During these you will have an opportunity to interface with various wild animals. These walking safaris are restricted to persons over sixteen (16) years of age while boat safaris are for those over fourteen (14) years of age.

Towards the end of the dry season especially, game drives are rather truly rewarding as many large mammals gather around the five lakes .Some of the camps offer overnight fly camping excursions which involve sleeping out in an exalted mosquito net in the middle of the bush land.

The Selous Game Reserve, with an area of about 55,000 sq. km, is the largest well-watered wildlife sanctuary in Africa, and one of the largest protected areas in the world. Its size is simply stunning, bigger than Switzerland, uninhabited and little touched by human interference. It is perhaps the most pristine wilderness still remaining in Africa, Named after Captain Frederick Courtney Selous, a legendary 19th century naturalist, explorer and hunter, Selous Game Reserve was founded in 1905. It is situated in the southern part Tanzania, bordered by Mikumi National Park to the northwest and by Udzungwa Mountains National Park and Kibasira Swamp to the west. The best time to visit the Selous is from June to October. Due to its unique ecological importance, it was designated a World Heritage Site by the United Nations in 1982. During the long rains, between March and May, some parts of the Selous become impassable and are temporarily closed for game drives.

Its wildlife is spectacular, with some of its mammal and reptile populations are the largest in Africa, There is a large population of predators including lions, leopards, cheetah and the spotted hyena, and about 440 species of birds in the Selous, of both resident and migratory birds, with a wide variety of wildlife habitats, including open grasslands, Acacia and miombo woodlands, swamps and riverine forests in the many tributaries of the mighty Rufiji River which flows through the reserve.

How to Get There – Selous Game Reserve

Holidaymakers planning to visit the Selous game reserve can access it in three different ways including by road, railway or flight.

Adventure guests looking out to visit the bush land heading to Selous Game Reserve have three modes of transport options from which to choose, that is to say flight, road and rail.

When connecting from Dar es Salaam, you can drive through Mikumi National Park following the normal circuit route and access the Selous through the Matambwe gate. However, I can’t fail to mention that the drive is quite long taking approximately 7 hours.

Alternatively, you can enter the Selous driving through the town of Morogoro where you will have an opportunity to see the lifestyle of the local people living within rural Tanzania, as well as enjoy views of the Ulugulu Mountains in the background.

Another exciting and adventurous way to get to Selous game Reserve is through the Tanzania Zambia Railway (TAZARA). This begins in Dar es Salaam, taking you through the bush-routes to the rail stop found in Matambwe. This takes approximately 5 hours.

There are several scheduled departure flights connecting from Zanzibar, Dar es Salaam and Arusha that land at public airstrips as well as different accommodation facilities. Julius Nyerere International Airport (DAR) is used as the entry point for the country. Although this is the quickest way to reach the Selous, it is also the most expensive. It’s about 45 minutes from Dar Es Salaam to the nearby airstrips.

The Selous can best be visited from June to October. During the dry season, it is much easier to watch the wildlife as the animals are normally converged at the water points, and also the vegetation at this time is thin, thus giving uninterrupted views. At this time the tourist area surrounding River Rufuji is crowded. It’s sunny most of the time and mosquitoes are very few which implies that chances of catching malaria are very limited.

Unlike during the dry season, the wet season which is the low tourist season that starts in March to May, most of the lodges are closed

This begins in October all through to May offering very beautiful green scenery.  In March, April and May, tourism business is slow as the crowd is smaller. The roads are muddy and slippery which hinders the movement of holidaymakers. This is not a good time to see the wild animals are they are hidden deeper within the park and the vegetation is thick as well. And at this time most of the accommodation facilities are closed. However, bird watching is very rewarding during this time of the year.

Where to Stay in Selous Game Reserve

There are a number of accommodation facilities found in and around Selous game reserve ranging from budget, mid-range to luxury facilities. These vary from lodges, campsite, and tented loges. So irrespective of your budget, you definitely cannot fail to get a place to stay while on Safari in the Selous Reserve.

This sanctuary is among the biggest protected areas in the entire world and extends over close to 5 regions of the country: the Ruvuma, Coastal region, Morogoro, Lindi and Mtwara, covers an area of over 50, 000 sq km. It is situated in southeastern Tanzania. in the present day, the Selous Game Reserve is the sole largest game reserve on the African continent, and perhaps in the whole world.

The most prominent geographical feature in this game Reserve is River Rufiji plus its tributaries: River Kilombero as well as River Ruaha. The river is fed by the various smaller rivers, streams plus attributes.

The vegetation of the Game Reserve greatly varies. The terrain is dominated by Savannah wooded grasslands plus deciduous Miombo woodland. thick thorn bushes as well as ground-water forests plus rocky outcrops also characterized the landscape of the Reserve.

The Selous Game Reserve supports the world’s biggest population of elephants plus buffalos.  Other animals within the reserve include lions, leopards, the third biggest number of African wild dogs in the world, antelopes, giraffes, wildebeests, and giant crocodiles congested in River Rufii. In addition the reserve has a diversity of birds among which are   kingfishers, waders, fish eagles, herons, weavers and African Skimmers.

Birding in the Selous

Because the birdlife of the Selous Game Reserve is mainly influenced by River Rufiji, there is a large concentration of birds drawn to this region. This river together with its natural features among which are lagoons, sandbanks, channels, oxbow lakes and islands offer a range of habitats to the various species of birds plus other wildlife. For instance, Lake Nzerkela and Lake Tagalala are home to terns, storks, and herons, together with various migrant waders.

Other Activities within the Selous