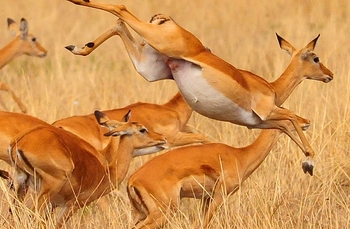 m west of Arusha in the crater highlands of Tanzania. The crater is the largest volcanic caldera within the area, it’s the world’s inactive, intact as well as unfilled volcanic caldera. This crater is 610 metres deep, and its floor covers 260 sq kms. The height of the original volcano also ranges from 4500 to 5800m and its 1800m above the sea level. The crater also harbours a lots of wildlife species including; elephants, hippos, lions, rhinos, zebras, common eland, Thomson gazelles, water bucks and many more.

The safari also takes you to Lake Manyara national park which is located in both Manyara region and also in Arusha region. It’s just 126km south west of Arusha and can also be reached with in 1 hour and half. It consists of 330km2 of arid land, forests and a soda like lake which is 200km2. The national park is mostly known for flamingos, 400 bird species, leopards, Masai lions, cheetahs, elephants, blue monkeys, dik dik, gazelles, Masai giraffes, impalas, as well as hippos. The park is also close to Tarangire national park as well as Manyara Airport which is located at the top of the rift wall.

And lastly the safari takes you to Tarangire national park which is the 6th largest park in Tanzania after, Serengeti national park, Ruaha, Mikumi, Katavi as well as Mkomazi national park. It’s located in manyara region and its name originates from Tarangire River.  The park also lies in the south east of Lake Manyara and it covers an area of 2850 sq kms with diverse land scapes covered with baobabo trees, high grasses and the dense bush. It’s mainly famous for elephants, tree climbing lions, zebras, wildebeests, waterbucks, giraffes, olive baboons, 550 bird species including the yellow collared love birds. The national park is also famous for the termite mounds which are dotted all over the land scape. The park is also 240km and 4 hour drive from the city centre.

Your pick up will be from Arusha and straight away start your journey to Lake Manyara national park. We shall arrive in time for lunch at the lodge, immediately after your lunch, proceed for a game drive with in the park, the park is Tanzania’s most dramatically located wildlife area which consist of massive soda lake that is located at the foot hills of the Great Rift Valley. This national park also attracts lots of wildlife species like the elephants, tree climbing, flamingos and many more.

Have your breakfast and after head to Serengeti National park passing via the beautiful high lying farm land of Karatu as well as the Ngorogoro conservation Area. We shall then descend into the wild heart of Africa which is the mighty Serengeti national park, which has got endless plains, rolling into the distance as far as your eyes can see. On arrival, we shall head to the central park area which is known as the seronera area which has lots of wildlife habitats in the park, with the famous Seronera River that provides valuable water source to this area and therefore attracts wildlife species to the park. We shall have lunch and then enjoy an afternoon game drive within the park were we shall view many animal species including; the leopards, lions, Nile crocodiles, birds, as well as black Rhinoceros.

Be one of the lucky few to take a hot Air balloon over the Serengeti plains as you float silently above the bushes, spotting wildlife species and enjoying the scenery of African parks, water bodies as well as many local villages. You will as well do a game drive along the Sogore river circuit were you will view many animal species including the lions, gazelle, topis, cheetah and ostrich. There is also a visitor centre which is close to the Serengeti Seronera lodge and the public campsites which are worthwhile places for morning game drive. This centre offers so many interesting wildlife displays as well as gifts, information leaflets and maps of the area. You can as well get cold drinks and snacks as well as a picnic area and information trail up. We shall also have lunch at the same centre in shades of the acacia trees.

Later in the afternoon, we will follow the Kopjes circuit which is around the Maasai Kopjes that attracts lions and large cobras. These Kopjes are weathered granite crops and scattered around the plains with miniature ecosystems that provide drinking water and shade in the pools left within the rocks after the rains. These kopjes is good for spotting wildlife in the dry seasons like the lions and many more.

Have your breakfast at the lodge and after depart to Ngorongoro Conservation Area having a stopover at Olduvai Gorge were the anthropologists Drs. Lois as well as Mary Leaky discovered the skulls of the Nutcracker man and Handy Man which skulls are both linked in the chain of Human Revolution.

We shall as well arrive in time for lunch at the lodge and after descend 600m into the Ngorongoro crater to view the many wildlife species found here. Some of these include; Wildebeest, zebras, buffalos, eland, warthogs, hippos, the giant African elephants, as well as lions, jackals, hyenas, cheetahs and the elusive leopards. We will as well visit Lake Magadi which is a large but also shallow alkaline lake with in the south western corner, which is the main feature in the crater. One can located many flamingos, hippos, as well as water birds.

Have breakfast, we depart to Tarangire national park which runs along the line of the Tarangire river and is made up of low lying hills on the great Rift valley floor. This is a natural vegetation which consists of Acacia woodland as well as the giant African Baobab trees and the huge swamp areas in the south. Both of the rivers and swamps harbour many wildlife species including; the elephants, greater Kudu, fringed eared Oryx as well as the Ashy Starling. After the picnic lunch, you will have afternoon game drive.

We shall enjoy an early morning game drive in the park, which will be followed by a fatty breakfast at the lodge. We will then transfer back to Arusha and have lunch, after you will proceed to the Airport to catch your flight or be dropped at the hotel for an overnight.